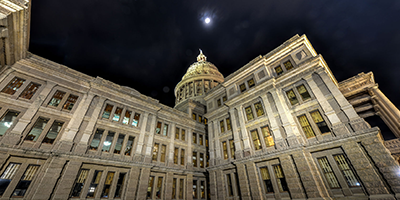 Today is the last day of the 86th Legislative Session. In the past two weeks, among other actions, the legislature has approved final bills on the budget and supplemental budget, school finance reform, property tax reform, approved major changes to the state’s treatment of online sales tax, and extended significant “Chapter 312” property tax abatements.

Legislature Reaches Compromise on School Finance. Last Thursday, Gov. Greg Abbott, Lt. Gov. Dan Patrick, and House Speaker Dennis Bonnen held a joint press conference to announce that the Legislature had reached an agreement on HB 3, the plan to reform the school finance system and slow the growth of property taxes. The bill will include full funding for full-day pre-K, a significant increase in the basic per-student allotment, and provisions to increase pay for highly effective teachers. In total, the bill will add $5.5 billion to the school finance system, reduce recapture by about half, and lower school district taxes by about 13 cents per $100 valuation by 2021.

Conference Committee Reports on Budget and Supplemental Budget. On Sunday, the House and Senate adopted the conference committee reports for HB 1 and SB 500, the General and Supplemental Appropriations Acts. The Conference Committee report for HB 1 calls for $250.7 billion in all funds for the 2020-2021 biennium, which is $500 million below the House Bill and $3 billion above the Senate Bill and represents an increase in spending of 16% compared to 2018-2019. The budget includes $6.5 billion in new spending for schools, $5.1 billion to slow the growth of property taxes, and $84 billion for health and human services programs. The Supplemental Budget authorizes an additional $1.7 billion in spending to meet leftover Medicaid and foster expenses, and authorizes a $6.1 billion withdrawal from the state’s Economic Stabilization Fund (the “rainy day” fund) to pay for infrastructure projects and Hurricane Harvey recovery, including $1.7 billion to establish the two new infrastructure and resiliency funds to help local governments implement major projects and ease access to federal matching funds.

Conference Committee Report on SB 2. On Saturday, the House adopted the conference report for SB 2, the property tax reform bill. The bill would cap the revenue growth of cities, counties, and other taxing units at 3.5% compared to the previous year, after which point voter approval would be required to collect further revenue. Certain other entities, like community colleges, hospital districts, and units with tax rates below 2.5 cents per $100 valuation are subject to an 8% cap. In addition, taxing units may “bank” unused revenue growth for up to three years and use it in subsequent years without securing voter approval. The bill would also create a database for property owners to determine how proposed changes could affect their bills and include information on public participation in the process. “Texas taxpayers are frustrated by rising property taxes. They are often confused about the process and many are scared of losing their homes,” said the House sponsor of the bill, Rep. Dustin Burrows (R-Lubbock).

Governor Signs Online Sales Tax Bill. On Friday, May 25, Governor Greg Abbott signed HB 1525, which updates Texas law to reflect the recent United States Supreme Court decision allowing U.S. states to collect sales and use taxes from sellers who are not physically located in the state. The bill requires a marketplace provider (a person owning or operating a marketplace as defined in the bill) meeting to collect and remit sales taxes to the comptroller on items shipped or delivered to the state and require providers to certify each individual selling taxable items through its marketplace. The bill is expected to raise approximately $550 million in 2020 and 2021 and will now head to the governor for a final signature. If approved, the law will take effect on October 1, 2019.

Legislature Extends Chapter 312. On May 23, the House concurred with Senate Amendments to HB 3143, which would extend the property tax abatement program in Chapter 312 of the Tax Code that allows cities and counties to exempt increases in property value from taxation for a period as an economic development tool. The bill extends the requirement for public notice from three days to 30 days and does not prohibit local governments from offering abatements to wind and solar projects.

End of Session and Veto Period. Monday, May 27th is Sine Die – last day of the 86th Regular Session. Only corrections may be considered in the House or Senate. In total, 4,009 bills were passed by both the House and the Senate this session. The governor may sign or veto bills passed during the session until Sunday, June 16th, 2019. So far, the governor has signed 287 bills, and vetoed only two. If the governor takes no action on a bill, it will go into effect automatically. So far, 19 bills have taken effect without the governor’s signature. Most new laws will take effect on September 1, 2019, though some have different enacting dates or are effective immediately.