House Republican PAC Comparison. The Speaker of the Texas House typically administers a campaign Political Action Committee to protect the party’s incumbents and overall majority in the House. The Texas Leads PAC, established by House Speaker Dennis Bonnen before he announced that he would not run for another term, had collected more than $3 million in contributions. Bonnen’s Texas Leads PAC has so far contributed to only a few members: Briscoe Cain, Dennis Paul, Phil Stephenson, Dan Flynn, Chris Paddie, Geanie Morrison, and Jared Patterson. 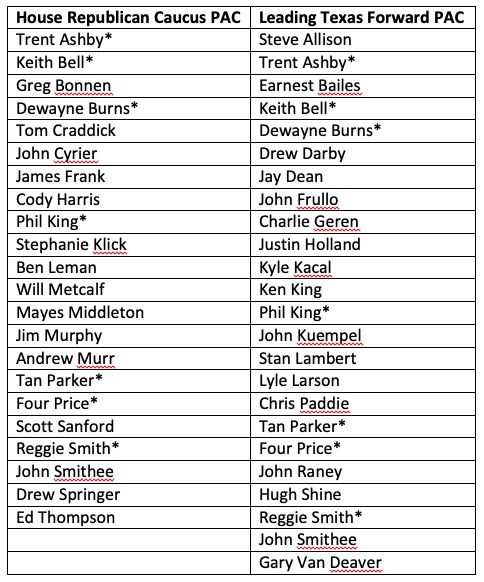 More information on fundraising can be found at the Texas Ethics Commission.

HHSC Executive Commissioner Resigns. Courtney Philips, the Executive Commissioner of the Texas Health and Human Services Commission, is stepping down to become secretary of Louisiana’s Department of Health. “Upon deep reflection, I have decided to return to my home state to serve as Louisiana’s Secretary of Health and be closer to my family and loved ones,” she wrote in a resignation letter to Governor Greg Abbott on Wednesday. Philips formerly worked at the Louisiana Department of Health and Hospitals and holds three degrees from universities in Louisiana.