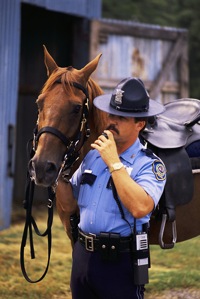 The United States Supreme Court overturned three of four challenged provisions in the controversial Arizona immigration law S.B. 1070 by a 5-3 majority in Arizona v. United States.  The Court held that Congress has enacted a comprehensive immigration registration and enforcement regulatory scheme that preempted the three provisions of S.B. 1070 that created state-level penalties, Sections 3, 5(C), and 6.  The Court refused to strike down Section 2(B), which requires state officers to make a reasonable attempt to determine the immigration status of an individual stopped by the officer, because it was not yet clear how this provision would operate in practice.

Section 3 created a new state misdemeanor for the willful failure to complete or carry an alien registration document.

Federal law provides a comprehensive alien registration framework that occupies the entire field.  Enforcement of Section 3 conflicts with federal law by empowering the State to prosecute violations where federal officials have determined that doing so would frustrate federal policies and by imposing penalties that differ from federal law.  The Court held that federal law occupied the entire field of alien registration preempting additional or auxiliary state legislation intended to complement the purpose of the federal regulatory scheme.

Section 5(C) made it a misdemeanor for an unauthorized alien to knowingly work or seek work in Arizona.

No comparable federal criminal counterpart exists.  The Court held that this provision was preempted by federal law because the Immigration Reform and Control Act (IRCA) created a comprehensive framework for combating the employment of illegal aliens.  IRCA creates civil and criminal sanctions on employers that hire illegal aliens, but it only imposes civil sanctions on illegal aliens that seek work in the United States.  By imposing criminal sanctions where Congress had not, Section 5(C) created an obstacle to the regulatory system Congress choose and was preempted by federal law.

Section 6 permitted a state officer to arrest a person without a warrant if the officer has probable cause to believe that the person has committed any public offense that made them removable from the United States.

Illegal presence in the United States is not generally an arrestable offense.  Rather, certain federal procedures must be followed and a warrant issued prior to the arrest of an alien for illegal presence.  Because Section 6 gave state officers greater authority to detain illegal aliens than federal law permitted federal immigration officers, the Court held that it was an obstacle to the objectives of Congress and was preempted by federal law.

Section 2(B) requires state officers to make a reasonable attempt to determine the immigration status of any person the officer stops, detains, or arrests on some other legitimate basis if the officer has a reasonable suspicion that the person is an alien who is unlawfully present in the United States.

An officer may not consider race, color, or national origin except as permitted by the United States and Arizona Constitutions.  The Court held that a decision on whether this Section was preempted was premature because the Court did not know how it would be implemented.  Federal law permits and encourages cooperation between state and federal officials in the determination of immigration status.  State and local officers may contact Immigration and Customs Enforcement 24 hours a day, 365 days a year, to determine the immigration status of detainees.  Thus, Section 2(B) does not necessarily interfere with any federal objectives.  However, the Court was clear to note that Section 2(B) may be preempted if it is not properly enforced.  Federal law does not permit the initial detention or prolonged detention of an alien in order to determine their immigration status.  If Section 2(B) leads to the detention or prolonged detention of aliens arrested on other grounds, the Supreme Court will likely determine that it is an obstacle to federal law and preempted.  However, it is unclear how state courts will interpret this provision, so the Supreme Court declined to make a definitive determination on its  Constitutionality.  The Court did leave open the possibility of future challenges to Section 2(B) after it has taken effect.

This decision was a major blow to proponents of stronger state-level immigration enforcement.  It precludes many state level schemes intended to complement federal law.  Congress has created a comprehensive immigration registration and enforcement regulatory scheme.  This federal scheme preempts many enforcement efforts considered by states.  Future immigration status verification legislation must be careful to stay within the guidelines the Supreme Court set out.  State level penalties for non-compliance with statutes that mirror federal law may frustrate federal policy and be preempted as an obstacle to federal law.