The following is a digest of a story that appeared in June of 2012 at the Austin American Statesman. The Texas Lobby Group is publishing this digest as a service for all Texas lobbyists, government consultants, state politicians, and politically engaged persons.

All forms of social media are becoming commonplace for politicians, lobbyists, and government agencies. A recent examination of Texas state agencies shows that almost all of them are now using Facebook, Twitter, YouTube, and other lesser known social media. The Texas Government website now has a complete listing of all socially connected agencies. 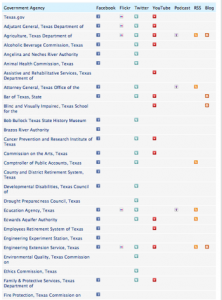 Screenshot of social media listing at the Texas.Gov website.

A handy chart lists all Texas agencies on the left and their various social media pages and services in a grid. Popular social media uses among government officials include:

Twitter – running in second place. Though limited to 140 characters, Texas government officials are tweeting the news to the masses.

RSS Feeds abound, allowing people to subscribe to government websites and be notified when new content is posted.

Podcasts and Blogs are also present, though not as popular.

As a great example of how these services are helpful, The Texas Workforce Commission used Twitter last summer to help wildfire victims find emergency benefits for those who were put out of work by the fires. The agency uses social media channels to get the latest news and information to Texans looking for jobs.

“It may sound comical to us when we say Twitter and Facebook,” said Rep. Aaron Peña, R-Edinburg, an early adopter of social media at the Capitol, “but, I think, in 10 years it’ll be part of everything we do.”

The Texas Department of Information Resources has completed a study of guidelines for state agencies using social media. Along with  the benefits are potential risks with state officials able to communicate instantly with the public, unprotected by an editorial boundary. There are also considerable ethical issues surrounding improper compaigning and personal promoting from one’s position as a government official.

Still, these new communication and networking tools are here to stay. So while rules and guidelines are needed, social media is not going away. And as it appears to be the dominant form of communication for the upcoming generations, savvy politicians and government officials are getting started exploring this new world now.