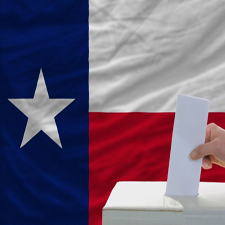 A few weeks ago we reported on a story from Capitol Inside about potential low voter turnout if Mitt Romney won the nomination. The thinking at the time was that Romney was not going to inspire voter turnout in the Fall, since no one seriously thinks Obama can beat Romney in Texas anyway.

Texas Weekly is now reporting that voter turnout may indeed be low for the late Texas primary elections, now that Romney has apparently sewed up the nomination. Without a compelling national candidate or issue, Texas voters may not be inspired to turn out for the Primary in May of 2012.

Unfortunately, that leaves some political races that are important to locals without a driving national agenda of any kind to insure interest and turnout. It leaves Texas without a turnout issue of any kind.

Candidates dependent on turnout will be without the edge they might have enjoyed if we had our primary election back in March. We would have had a national battle with Rick Santorum fighting Romney in a state where polls favor Santorum.

That’s not happening now. People watching the polls think the Republicans may lose their constitutional supermajority in the Texas House. They will still have a majority but fall short of the supermajority.

There are certainly interesting local races that will ignite a certain amount of local interest. But we seem to lack the kinds of races and issues that drive voter turnout statewide. We don’t have the big personalities or issues in this election.

“The Senate race hasn’t generated that sort of interest outside of the five blocks surrounding the state Capitol. David Dewhurst appears, from his ads online and off, to be running in the general election for president. His target is President Obama. His opponents are vying for and hoping for a runoff spot in late July. They, too, are talking about the administration but also about the frontrunner and his unwillingness to appear in public forums and debates.

It’s not dominating the political news in the state — that’s all about the presidential race. And it’s a little early yet for heavy advertising.

Both major parties told the redistricting courts that delaying primaries would suppress turnout, create confusion and uncertainty, and threaten their convention planning and organization.

Looks like they knew what they were talking about.”