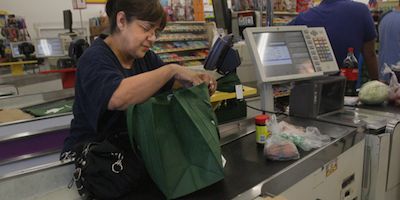 With a grim Texas budget outlook this legislative session, public universities, health care providers and state highways could all see significant cuts. Already, a hiring freeze has been declared across state agencies whose budgets are facing cuts of over 4 percent. Finding more items to cut has become exceedingly difficult, and a tax increase is out of the question.

The current Senate budget cuts around $400 million from higher education, a cost that will get pushed onto students in the form of higher tuition and fees. Health care for retired teachers is also facing tough math, and $590 million in health care funding is on the chopping block. Meanwhile, the Texas House is considering a measure to claw back some of the money that voters dedicated to the state highway fund in 2015.

Given this dire predicament, one may be surprised to learn that a significant portion of Texas’ sales taxes — on online, out-of-state retail sales — go uncollected. When you shop at H-E-B, eat at a local restaurant or purchase goods or services from brick-and-mortar Texas businesses, you will see the 8.25 percent sales tax added to your purchase. When shopping with an online retailer that maintains a physical presence in Texas (as small as having a single employee), sales taxes are collected on your purchase. In fact, the Texas comptroller has field offices in Chicago, Los Angeles, New York City and Tulsa to assist with these collections.

However, the growth of online retail has created a grey area where many retailers without a physical link to Texas are not required to collect and remit sales taxes themselves — even if they sell billions of dollars in goods to Texans. Unlike any other part of our sales tax system, consumers are expected to tally their online transactions and remit their taxes to the state themselves. With no way to enforce the law, the vast majority who shop online do not do so — or are unaware of the requirement.

This gives out-of-state online retailers a huge advantage because they can offer goods for a lower total price than Texas-based businesses to the detriment of main streets and local businesses across Texas. The 8.25 percent difference in price has a real influence on consumer behavior — a 2016 study found that Amazon’s sales decreased 10 percent in states that worked out deals to apply sales tax, compared with states that did not. Amazon began collecting sales tax in Texas in 2012, after negotiating an agreement with the state. Yet hundreds of other online retailers continue to sell billions in goods and services to Texans.

Ten percent of retail transactions are now online, and this proportion increases every year, while sales tax collection for the state of Texas has increased anemically. As our sales tax collections stagnate, lost revenue will be made up with higher taxes elsewhere, most likely through property taxes and additional cuts. Moreover, property tax revenue declines when local brick-and-mortar stores are driven out of business by out-of-state online retailers, shifting the tax burden to homeowners and those remaining businesses.

To address this issue, I’ve authored Senate Bill 1713, which would level the playing field for Texas-based businesses by requiring large out-of-state online retailers to remit the same sales tax as everyone else.

The policy landscape related to remote sales tax collection is changing quickly. In 1992, the U.S. Supreme Court, in Quill v. North Dakota, held that states could only apply sales taxes to businesses with a “physical nexus” in the state. The court reasoned it was too difficult to require retailers to collect each individual state’s tax. However, in 1992 almost no U.S. household had access to the internet, there were no online retailers and only 10 registered websites in total.

The Quill standard was not created with the current digital economy in mind, and in the 2015 decision Direct Marketing Association v. Brohl, Supreme Court Justice Anthony Kennedy hinted that he would like states to challenge Quill. In the past year, South Dakota and Wyoming passed remote sales tax collection into law. More than 20 bills are now moving quickly through state legislatures with wide bipartisan support.

As a member of the budget-writing Senate Finance Committee, I am deeply concerned with the depth and breadth of the proposed cuts to health care, higher education and transportation. Remote sales tax collection could mitigate some of these cuts. Estimates range widely, but SB 1713 could provide anywhere from $247.2 million to $1.8 billion in uncollected taxes per year, according to analyses collected by the comptroller.

Make no mistake — I am not claiming we can or should reverse the ways in which the internet has transformed our economy. Nor am I saying that enforcing collection of this tax would solve all of our budgetary woes. However, it would close a large loophole in our tax code and level the playing field for Texas-based businesses while ensuring that our sales tax system is uniform, rational and fair.

Read the original article at TribTalk.