Texans at the Tesla Factory 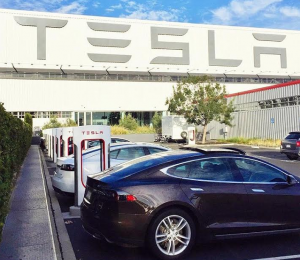 This past week, the Innovation and Technology Caucus of the Texas House took a trip out to San Francisco, California to see how some of the United States’ biggest tech companies are innovating the world. One of the most anticipated stops was the Tesla Factory in Fremont, California. Texas Legislators received a private tour of Tesla’s manufacturing facility and a sneak peak at Tesla’s newest SUV. Prior to Tesla, the facility was home to General Motors and Toyota’s New United Motor Manufacturing, Inc (NUMMI) from 1984 until the partnership ended in 2009. At its height under NUMMI, the plant produced 500,000 cars per year. Tesla is proud to be building on the rich manufacturing tradition of this facility for years to come. Texas Lobby Group’s Mike Toomey and Lara Keel joined Texas Legislators on tour and shared with Members the economic opportunities Tesla brings to Texas.