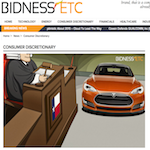 Tesla is readying another move to overturn the sales ban in Texas by recruiting more high profile lobbyists to push the matter in Texas courts.

Tesla Motors Inc (NASDAQ:TSLA) is readying yet another lobbying blitz against Texas lawmakers and auto dealerships to push a change in the state’s legislature, to allow it to bypass the traditional franchised auto dealership model and sell directly.After previous attempts that failed, the odds are a bit more in favor of Tesla this time around as company CEO Elon Musk is assembling a more powerful team of pro-Tesla lobbyists, almost all of whom are top Republican leaders. 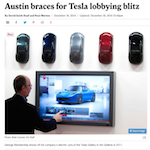 AUSTIN – Locked in a brawl with auto dealers, Tesla Motors CEO Elon Musk is unleashing some of the most powerful lobbyists and consultants in the state to persuade lawmakers to make it easier for his company to sell electric cars in Texas.

Click here to read the full story. You will need a subscription to the Houston Chronicle to read. 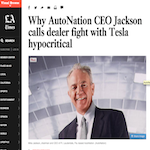 The efforts by various auto dealer associations across the U.S. to keep Tesla Motors from selling its expensive electric cars directly to the public is hypocritical and makes dealers look bad, said Mike Jackson, chief executive of AutoNation, the biggest operator of car showrooms in the U.S.

“You have dealers, entrepreneurial, free-enterprise guys, arguing for government protection,” Jackson said while visiting the Los Angeles Auto Show on Wednesday. “I don’t get it.”