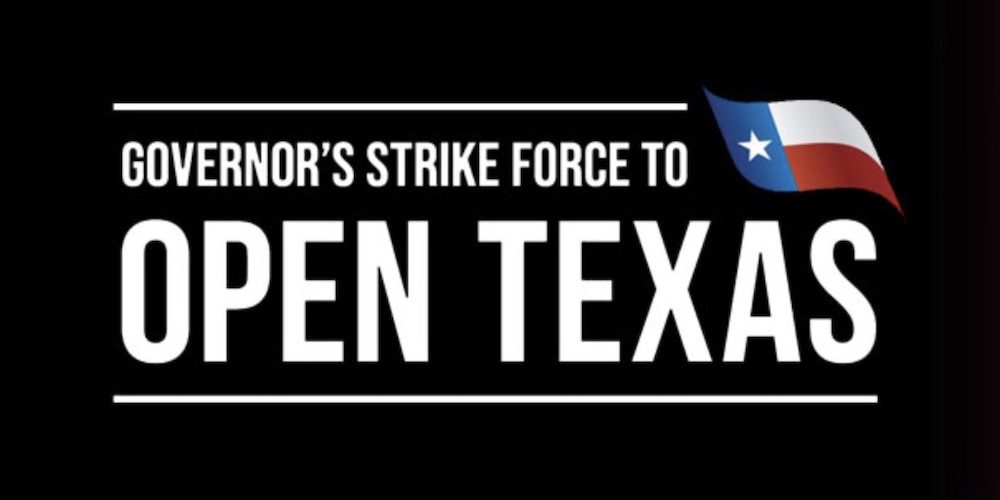 TLG UPDATE: Mike Toomey has taken a leave of absence from Texas Lobby Group to serve as the Chief Operations Officer of Governor Greg Abbott’s Strike Force to Open Texas. During this time, Mike will not be a registered lobbyist. Instead, he will be dedicated to getting Texans back to work and our State’s economy roaring once more. Texas Lobby Group and its clients will be managed by firm partner Lara Keel.

On April 17th, Governor Greg Abbott held a press conference to announce a series of executive orders taking initial steps to reopen the Texas economy. The governor said that he would make further announcements about loosening coronavirus-related restrictions on April 27th, which could include a lifting of the statewide stay-at-home order if infection rates continue to decline and testing capacities are sufficient. Summaries of his orders are below:

The full list of task force members can be viewed at the governor’s press release.

Schools Closed; “Retail To-Go” Expanded. The governor’s second executive order establishes a temporary “Retail-To-Go” model that will allow retail outlets in Texas to reopen beginning Friday, April 24. Under this model, reopened establishments are required to deliver items to customer’s cars, homes, or other locations to minimize contact. The Governor explained that experience over the past month has increased his confidence that the state can expand to-go retail service in a safe manner.

The order also closes both public and private schools for the 2019-2020 school year. Teachers will be allowed into schools for video teaching, to gather supplies, or for administrative needs. The Texas Higher Education Coordinating Board and Texas Education Agency will provide further guidance for best practices, including for graduations. The Governor said that schools would be likely be unsafe to re-open for the foreseeable future.

State Parks to be Re-Opened: Beginning on Monday, April 20th, the Governor has ordered state parks to be re-opened to visitors subject to certain restrictions. Visitors will be required to wear face coverings or masks in the park and maintain a distance of at least 6 feet. Groups will also be limited to 5 individuals or fewer.

President Convenes Members of Congress to Serve on the Opening Up America Again Group. On April 16th, President Donald Trump a hosted phone calls with Republican and Democratic Members of the House of Representatives and Senate serving on the Opening Up America Again Congressional Group. The dialogue between the President, senior Administration officials, and Members of Congress included the need for additional funding for the Paycheck Protection Program, the international and domestic supply chains, ways to stimulate the economy, surprise medical billing, clarifying the difference between essential and non-essential workers, mental health, and relief for small businesses. The White House also announced that it would soon provide guidance to governors to help determine their ability to reopen the economies in their respective states.

Governor Loosens Regulations for Physicians-In-Training. On April 11, Governor Abbott waived certain regulations related to restrictions on physicians-in-training permit holders in order to increase workforce capacity for the state’s response to COVID-19. With these waivers, Texas hospitals and facilities associated with Graduate Medical Education (GME) training programs will be able to utilize physician-in-training permit holders, with proper physician oversight, in areas outside of their GME training program – residents in a surgery residency program can assist in an Emergency Department if a surge of patients is experienced, for example. “These temporary waivers will expand the staffing capacity of our hospitals and medical facilities, ensuring Texans will have access to the care needed during the response to COVID-19,” said Governor Abbott. “I am grateful for all the frontline health care workers across the state serving their fellow Texans during this challenging time,” according to the Governor’s press release.

Governor Extends Disaster Declaration by a Month. On April 12, Governor Abbott issued a proclamation extending the Disaster Declaration for all Texas counties in response to COVID-19 by one month, to May 13th. The Disaster Declaration was originally issued on March 13th and set to expire after a month. “I urge all Texans to continue practicing social distancing and abide by the guidelines laid out by the CDC and my Executive Orders to slow the spread of COVID-19,” the Governor said. While the disaster declaration covers all Texas counties, it does not affect local governments’ ability to extend or modify their own emergency orders. Among the local governments extending their emergency orders this week are Dallas County (April 30th) and Travis County (May 8th).

Governor Announces SBA Loan Partnership with Goldman Sachs, LiftFund. On April 13, Governor Abbott held a press conference with Janie Barrera, president and CEO of LiftFund, which offers loans and assistance to entrepreneurs, and John Waldron, president and COO of Goldman Sachs to announce a new initiative for small businesses affected by the COVID-19 pandemic. Goldman Sachs will commit $50 million to COVID-19 relief, and LiftFund, alongside other community development financial institutions, will administer funding to qualified small businesses. The loans are intended to support businesses that are maintaining their payroll during the pandemic, and Liftfund previously collaborated with the state on Hurricane Harvey relief.

If all stipulations are met, small business can have their loans forgiven in full by the SBA.  Also attending the conference was Brent Reaves, a Dallas restauranteur, who shared his positive experience with previous Goldman Sachs small business assistance programs. Janie Barrerra with Liftfund said that the organization would begin collecting applications to participate in the program immediately.

Railroad Commission Considers Production Limits. On April 14, the Texas Railroad Commission held a virtual hearing to consider requests that production of oil be cut statewide for the first time since the 1970s in response to historically low oil prices and falling demand. Nearly 60 industry representatives and market experts testified at the hearing that lasted nearly the entire day. While the Commission did not make a decision at the meeting, it did consider alternative options for how proration could happen, with options ranging from an across-the-board cut of up to 20% to more targeted options that would carve smaller producers out of production limits.