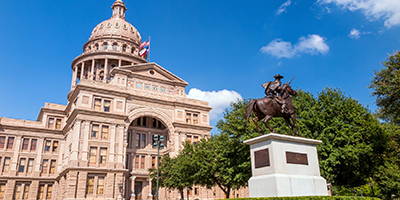 Governor Greg Abbott delivered his State of the State address on Tuesday, addressing a joint chamber of the Senate and the House. In his speech, he noted Texas’s recent successes, especially in energy production and economic measures like unemployment. Gov. Abbott also designated several emergency priorities for the session. Lawmakers normally may not pass bills before the 60th day of session. But with the governor’s declaration naming these priorities as emergencies, lawmakers can consider bills on the following topics immediately:

After discussing the strain that high taxes can place on businesses and long-time homeowners, Gov. Abbott called for measures to rein in the growth of property taxes and give taxpayers the ability to elect their local tax appraisers. To apply the lessons of Harvey, the governor said, lawmakers should create a statewide system to improve the way the state responds to natural disasters. Abbott specifically mentioned the efforts of Senator Charles Perry, R-Lubbock, who has filed SB 396 to direct state agencies to develop integrated plans for major hurricane and flood events.

While the Governor made few specific policy proposals for his educational priorities, he did set out broad goals for reform. Pointing out that fewer than 40% of third graders are reading at grade level and fewer than 40% of SAT/ACT-takers were prepared for college, the Governor called on lawmakers to ensure that every student reads at grade level by the time they finish the third grade and later graduates with the tools needed to excel in college or a career. He also pushed lawmakers to replicate the model of Dallas ISD and create pathways for exemplary teachers to earn six-figure salaries.

Abbott mentioned the need for innovative mental health programs, designating the issue as an emergency and voicing support for Senator Jane Nelson’s (R-Flower Mound) plan to create the Texas Mental Health Care Consortium. And though he did not name it as a separate emergency item, Abbott discussed the mental healthcare needs of veterans and pushed lawmakers to fully fund mental health programs for veterans at the Health and Human Services Commission and at the Texas Veterans Commission.

Click here for more information on the Texas Legislature