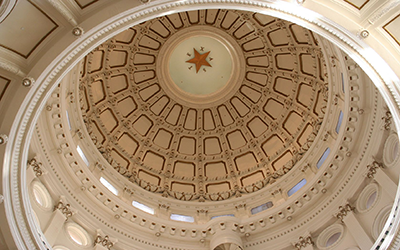 Capitol Inside released their biennial Texas lobby power rankings this week, and Texas Lobby Group made another impressive showing in several categories. At the Capitol, state leaders released a proposal for property tax reform and new member was elected to the House of Representatives. The Governor’s State of the State Address is s

“Keel is only the second female lobbyist to crack the top 10 on the hired gun list since the rankings were conceived in early 2003…But Keel has moved into a league of her own as the only woman in the Austin to climb as high as sixth on the hired gun chart where she appears this year.”

Partner Lara Keel has been ranked as the top female lobbyists for five legislative sessions, and Capitol Inside identified some of the reasons why:

Partner Mike Toomey is also one of only three lobbyists to appear both in the Texas Lobby Hall of Fame and on the list of top contract lobbyists. The rankings speak at length about his long run at the top of the business:

Neal T. “Buddy” Jones and Mike Toomey have all but owned the top of the mountain in the rankings that appeared initially on the day when the Texas political and governmental news and information publication was born online exactly 16 years ago today. Toomey – a former Texas House Republican who served as the chief of staff for two governors – has been rated lower than second only once since 2005 on the hired gun list that’s been the project’s centerpiece in the lobby rankings that are rolled out during the opening month of regular sessions in odd-numbered year…Toomey and Jones have each slipped to third only one time in that period. Both still appear to be at the top of their games for reasons that are similar in some aspects and considerably different in others.”

Property Tax Reform. On Thursday, Governor Greg Abbott, Lt. Governor Dan Patrick, and Speaker Dennis Bonnen jointly announced their support for the Texas Property Tax Reform and Relief Act, filed as SB 2 in the Senate and HB 2 in the House. Among other changes, the Act would lower the rollback rate from 8% to 2.5% and require an automatic ratification election if the rate is exceeded for taxing units collecting more than $15 million in annual revenue. House Democrats responded with a press conference urging lawmakers to move cautiously and consider the impacts of the proposal on public education funding.

Special Elections. Two House Districts held special elections on Tuesday. In El Paso’s HD 79, Democrat Art Fierro defeated Mike Noe to fill the term of former Representative Joe Pickett (D-El Paso). Fierro is a marketing professional and the Chairman of the El Paso Community College Board. In Houston’s HD-145, Democrats Christina Morales and Melissa Noriega advanced to a run-off election from a field of eight candidates. The governor is expected to call a date for the run-off soon to fill the term of Rep. Carol Alvarado (D-Houston), who was elected to the Senate in November. Finally, early voting began on Monday in San Antonio’s HD 125 to select a replacement for Rep. Justin Rodriguez (D-San Antonio), who was appointed to the Bexar County Commissioners Court. Four Democrats and one Republican are running in the election to be held February 12th.

State of the State Address. Governor Abbott will deliver his State-of-the-State address to a joint session of the legislature on Tuesday, February 5, 2019. During this speech, the Governor will declare emergency items that will not be subject to the 60 day moratorium other bills must adhere to.

For more on these topics and other information about the legislature, see www.capitol.state.tx.us.