A Closer Look at Competitive Races in the Metroplex 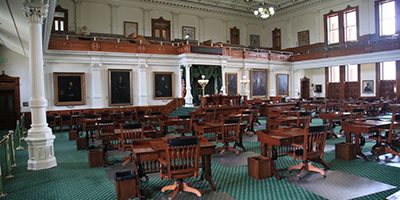 This week we cover three North Texas General Election races for seats in the House Chamber of the Texas Legislature. As we previously noted, there are few true swing districts in Texas. However, the highest concentration of Texas “swing” districts is in the Dallas-Fort Worth Metroplex. Democrats are specifically targeting these districts ahead of Election Day hoping to steal a few seats from incumbent Republicans in the area. Below is a breakdown of three competitive General Election races in the Metroplex.
Texas House District 105:
Incumbent State Rep. Rodney Anderson (R-Grand Prairie) will face Democrat Terry Meza (Irving) on Election Day. House District 105 resembles an upside-down teardrop situated almost directly between Dallas and Fort Worth. In the 2016 Presidential Election, Hillary Clinton won House District 105 by 8.5% over President Trump. However, Republican Party primary vote totals from the March 2018 Primary Election show 500 more Republicans voted than did Democrats. A slightly Republican leaning district, Democrats will have to rely on getting out the vote in order to steal this district. Despite the expected competitive race ahead, Rep. Anderson already beat Meza in the 2016 General Election and holds a $112,000 campaign war chest to Meza’s $3,282.
Texas House District 112:
Incumbent State Rep. Angie Chen Button (R-Richardson) will face Democratic challenger Brandy Chambers (Garland) in November. House District 112 is situated northeast of Dallas but south of Plano – an area many publicly traded companies use as their company headquarters. In the 2016 Presidential Election, President Trump narrowly lost to Hillary Clinton by 1.2% in the district, but in the most recent Primary Election, Republican vote totals outnumbered Democratic totals by almost 1,000 votes. In a Republican leaning district combined with Rep. Button’s impressive amount of campaign cash on hand ($672,941 compared to Chambers’ $13,285), Rep. Button is expected to win. Rep. Button is well known in the district, a principled conservative and has held this seat since 2008.
Texas House District 115:
Incumbent State Rep. Matt Rinaldi (R-Irving) draws Democrat Julie Johnson (Carrollton) in the General Election. House District 115 is just northwest of Dallas and covers parts of the Dallas/Fort-Worth International Airport. President Trump lost this district to Hillary Clinton by 7.9% back in 2016 and in the most recent Primary Election, vote totals for the Democrats exceed Republican totals by 700 votes. Yet, this is a Republican leaning district and Rep. Rinaldi holds about $100,000 more than Johnson in campaign funds heading into the General Election. Rep. Rinaldi should win. Rep. Rinaldi, an attorney, is a skilled orator and tirelessly fights for the interests of his district on the House floor.
Category: Texas 2018 ElectionsJuly 10, 2018
Recent Articles
Go to Top